CVLS was appointed as Guardian ad Litem (GAL) for a 77-year-old man named Mr. R. At the time of our appointment, Mr. R. was living independently in his own home, which was in major disrepair. Mr. R has dementia, among several other health issues, and although he had some family members to check in on him from time to time, he had no consistent support network.

When longtime volunteer and CVLS award-winner, Caroline Shoenberger, met with Mr. R. in her role as GAL, he objected to guardianship and stated clearly that he wished to remain in his own home. Over a two-year period, Caroline advocated for independent counsel to be appointed for Mr. R, contacted Adult Protective Services (APS) and other service agencies to ensure Mr. R’s safety and well-being, and petitioned the court for the appointment of a neutral guardian through the Office of Public Guardian (OPG).

Even after his family and friends stepped away, Caroline continued advocating for Mr. R.’s safety and well-being while honoring his agency and self-determination. Despite being uncooperative at first, Mr. R. eventually acknowledged that he needed support and agreed to OPG’s appointment. He was able to move into an assisted living facility on his own terms.

In Caroline’s words, “this was a sad case,” but due to her patience and hard work, Mr. R.’s voice was heard throughout the process, his safety was protected, and most importantly, his dignity was honored. 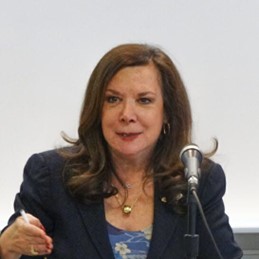