Juana owned a car with her own insurance policy. When she overheard that her neighbors were interested in buying a car of their own, Juana sold her car to them to make some extra money. Eventually expecting to buy a new car and transfer her existing insurance policy over, Juana didn’t cancel or update her policy. Unfortunately, the new owners never registered the car and never took out their own insurance policy against it.

A year after the sale, one of the new owners got into an accident while driving Juana’s old car. Juana’s insurance company sued her, the new car owners, and the other driver and his insurance company, asking the judge to declare that they did not owe anyone under their old policy with Juana.

Juana only speaks Spanish, so she was confused as to why she was being sued. Judge Meyerson was reviewing the case when she decided to refer Juana to CVLS for representation through our Chancery Appointment Program (CAP).

CVLS accepted Juana’s case and placed it with volunteer attorney, So Young (Anna) Lee. Anna made sure Juana understood all the aspects of the case, while guiding it to a successful conclusion. Juana’s insurance company voluntarily dismissed the case, and all the insurers and other parties dropped their claims against one another. The other driver’s insurance company will likely cover the loss under their own coverage.

Juana can now rest easy, knowing that no one will come after her for a car she doesn’t own. 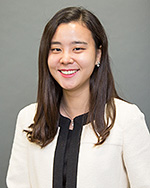