Nusra Ismail of Vedder Price PC has been volunteering with the CVLS Guardian ad Litem (GAL) for Minors Program for over a year, and has helped recruit and support a strong team of GALs at her firm.  In her most recent case, she was asked to investigate whether guardianship over a fifteen-year-old boy should be granted to his maternal grandmother over the objections of his mother.  What started out as a contentious legal battle across state lines ultimately ended up with an agreement that left all parties satisfied.

In 2016, the child’s mother had been struggling financially and asked his maternal grandmother to care for him during the weekdays while she worked.  Two years later, his mother found better economic opportunity in Texas and moved there.  Although she wanted to take her son with her, she allowed him to stay in Chicago with his grandmother so that he could finish grade school with his friends.  The child and his mother maintained regular contact after she moved and they continued to enjoy a loving relationship.  When the child finished grade school, his mother had hoped to finally move him down to Texas with her.  However, his maternal grandmother unexpectedly filed for legal guardianship over him.

After thoroughly investigating the case, including by speaking with the child, mother, grandmother, and other relevant parties, Nusra felt that this case did not necessarily need to be resolved via a final determination by a Court.  In Nusra’s view, there was no “bad” person involved in this case.  Both the mother and grandmother were extremely loving towards the child and both were fully capable of taking care of him financially.  There were no allegations against either party that raised any red flags whatsoever for Nusra.  The mother has always had the best interests of her son in mind, has kept in regular contact with him, and has always wanted to be reunited with him under the same roof.  The grandmother, in turn, had done a terrific job caring for the child and supporting him financially and emotionally.  In speaking with the child, Nusra learned that although he loved and missed his mother, he preferred to stay in Chicago with his grandmother as this was the only geographic location he knew as “home.”  However, his mother wanted to stay heavily involved in her son’s life and wanted to retain decision-making responsibility over him.

Nusra believed that both the mother and grandmother were reasonable individuals and could likely come to an amicable agreement regarding the child—they just needed a “nudge.”  During a status hearing, Nusra reported as much to Judge Miller, who then referred the case to mediation in front of Judge Malone.

Judge Malone proved to be an incredibly effective mediator and helped both parties come to an agreement that made the best sense for all involved.  Pursuant to the agreement, the child would stay in Chicago with his grandmother during the school year, but would spend summer and winter breaks in Texas with his mother and would have the option of moving to Texas full-time if he expressed the desire to do so.  Additionally, his mother would remain fully involved in all decisions relating to the child.  After the mediation, both parties expressed their gratitude with Nusra’s assistance in resolving their dispute and were relieved to be able to move forward as a family without the continued burden of this legal battle weighing on their shoulders.  Nusra also reported that she was thrilled to help formulate a resolution that was not only in the best interests of the child, but also satisfactory to his mother and grandmother.  Nusra looks forward to applying the lessons learned from this case to help resolve future cases as amicably as possible. 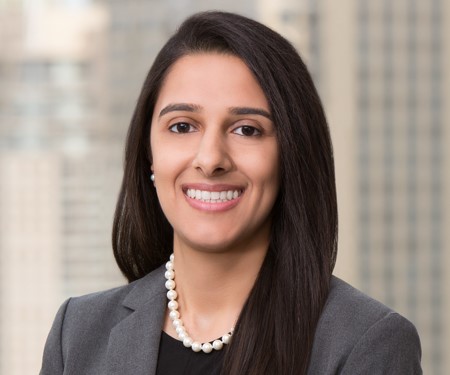 They just needed a "nudge"